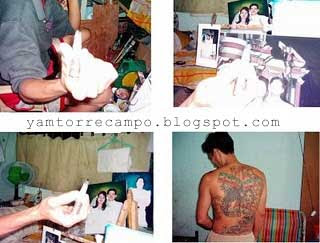 This picture had been used to support my story published by People’s Tonight sometime in October 2004. The news feature focused on the susceptibility of inmates to blood-borne diseases such as hepatitis B, which is transmitted from having unprotected sex, sharing drug needles, and getting a tattoo or body piercing with dirty needles and tools. Iâ€™ve personally seen the environment there and the gadget used by the tattoo artist. If the inmate client knows anything about dermatology or skin condition, he might not agree to have the tattoo mark on his back.