This was taken on September 26, 2005 during my daughter’s educational field trip .

Emilio Aguinaldo (March 23, 1869 – February 6, 1964) was a Filipino general, politician, and independence leader. He played an instrumental role during the Philippines’ revolution against Spain, and the subsequent Philippine-American War that resisted American occupation.

Aguinaldo became the Philippines’ first President. He was also the youngest (at age 29) to have become the country’s president, and the longest-lived (having survived to age 94).

My entry for Tnchick’s Photohunt

My daughter is having second thoughts about joining her classmates to the fieldtrip next month. She said only few of her classmates have paid the fee and her friends are not even part of those willing to join. This is the reason why she is having a hard time deciding whether to go or not.

Meantime, I hope the vehicle hired by the school admin to transport the students and teachers during the fieldtrip should be in top shape to avoid untoward incidents. Drivers should have spare UTV or ATV Parts and accessories just in case they’ll get flat tire along the way.

Sketches will be the new home for my Photohunt entries. Here’s my pick for this week’s theme, stripes. 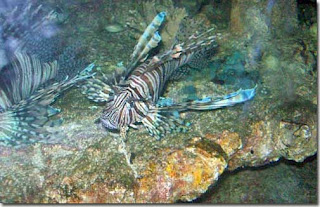 Lionfish
This was taken at the Ocean Discovery Aquarium of the Ocean Adventure in Subic during a school field trip last February.

Type:
Fish
Diet:
Carnivore
Average life span in the wild:
Up to 15 years
Size:
11.8 to 15 in (30 to 38 cm)
Weight:
Up to 2.6 lbs (1.2 kg)
Group name:
School
Did you know?
A lionfish will often spread its feathery pectoral fins and herd small fish into a confined space where it can more easily swallow them.
Size relative to a tea cup: